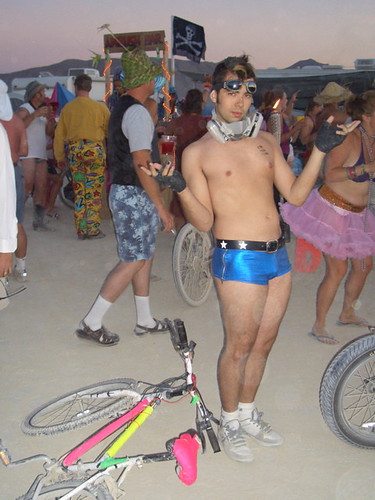 So what is burning man?

I can't explain it. I can tell you that I accomplished my personal

goal of getting a tan, and playing banjo, and getting away from cell

phones and computers. I wanted to write a lot about it, because it

made me think alot, but I also don't want to because it could last a

long time. It sounds retarded, but everything looks different to me

as I sit in my house now that I'm back. maybe partly because my mom

repainted the stairs, and changed the furniture, but everything seems

different. I didn't have a random sex hook up with a 35 year old like

some people, but I did have fun. I did get to be naked in front of

other people, and I did get to think about things, and get some new

I was pleasantly surprised how well it all went, and that I didn't

have any complaints about the living situation, and absolutely did

not miss anything from home. people companied about porta potties,

and lack of showers and dust in EVERYTHING, but the thought didn't

even cross my mind. Which, I realized has always been pretty true for

me. It's strange for a person who has so much stuff as myself to be

twice about it, but it's true. god, fuck the internet. I did enjoy

seeing posts from nate, Jon, patrick and MOmoko when I got back,

which is weird. it goes along with the "everything looks different"

theme. I think it's cause things are a little different. I think

everyone should go next year - especially Alex. I will post more

later. I took a whole ton of pictures and movies, and some really

really great ones. it's awesome!

my phone ran out of batteries on the trip, and I've been charging it all night, and it still says the battery is at 0%!!!! fuck!!! 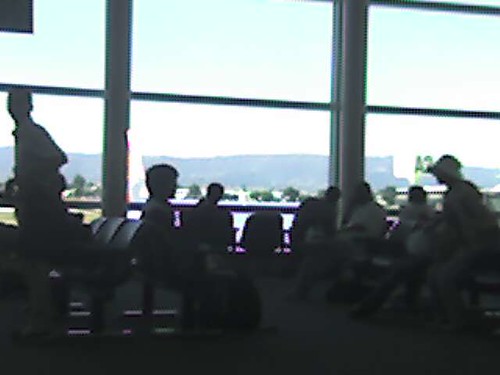 I am in the terminal in san jose, charging my phone in the wall. There is lots of japanese people here, and they all look the same as 3 years ago. As in, the fashion is the same, and women still seem to wear these rediculious shoes.

I just realised that I don't have anyone's number in japan anymore. So, maybe I won't call that many people. Hrm... I'm excited. I'm glad that I got my phone to actually charge. Mooooo... Weelll I wonder what will happen. I hope the plane is not fucking frreezing. Oh well that's what happens when I choose not to bring a jacket. I fuckong hate bringing too much stuff. Ok, my phone is at 61% battery. I'm hoping it will last me through the plane ride. I am planning on writting a play on the plane. Listening to rocket summer and writting my play. Bleep bloop. Anyone who wants to contact me can email my gmail email. A lot of japanese girls look really dumpy. Its weird.