So... it's time for christmas again! who wants an awesome christmas present?
People should start posting here about what they want. Although I think most people are going to get throwpillows with pictures of nick dulin and momoko on them. 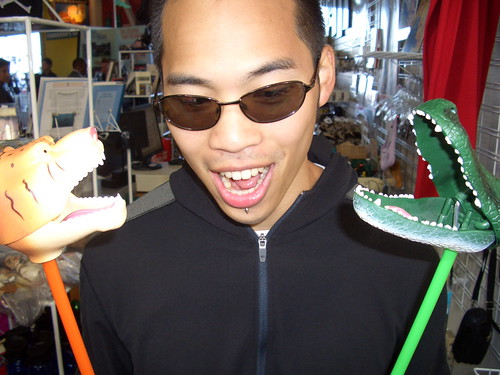 In other words, I actually got some work done on my job application. although really, I took the whole day to 90% write and revise one paragraph. That's actaully not so good. why am I so addicted to not doing things on time? hrm....

oh man. I just told Diane that there was a typo in the program for the boyfriend on the unfinished version I had. I was like,
"Did the boyfriend programs go downtown?" she said yes.
"Do you know if anyone caught the typo in 'Footlight review'? it's missing a T." Then she looked and got all pissed off. and it's like, yeah, that sucks - but what the hell, aren't you using your spell check? What is wrong with you? Also, why is there even a possibility of that being spelled incorrectly - it's exactly the same in evey single program!!!! are you telling me that you type it from scratch every show??? what is wrong with you?????

god, Fucking can't stand people who can't use their computers. I really need to get caught up to where I can just work on making a database.

also, I saw West side story last night with caitlin. it was not bad. actaully it was like a few days ago. but american idol girl was in it, and she was one hot mamacita! by that I mean she looked like she was 12, and we were reaally far away, so I couldn't see faces.