I'm getting tired of smelling like pee all the time... 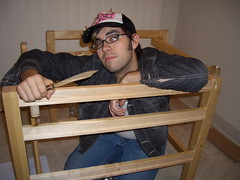 Look at our great ikea table!

The Japanese title for the series, Shin Seiki Evangelion, translates literally from a combination of Japanese and borrowed terms as "Gospel of the New Era/Century". The decision to call the series Neon Genesis Evangelion in English was originally made by Gainax, and not, as some fans have believed, by translators.
The title Neon Genesis Evangelion is Greek. Neon, the neuter form of the word "Neos", literally means "new" or "recently born". Genesis literally translates from Latin (from the original Greek) as "beginning" and is the first book of the Bible, describing the creation and beginning of the universe. The Japanese term for the first book in the Bible is "Souseiki," perhaps a wordplay (with two different beginning and ending kanji) with the "Shin Seiki" in the Japanese title. Evangelion is an anglicised version of the Greek "εὐαγγέλιον" (euangelion) for "good news", and is typically translated "gospel" in the Bible. Initially, the word meant "good messenger", the prefix "eu" meaning "good" and "angelion" meaning "messenger" (from the same word that means "angel"). It only came to mean "good message" or "good news" over time. This dual meaning may be the reason both the series itself and the "mecha" are called Evangelion.
Additionally, the term "Eva", a frequent abbreviation of Evangelion used in the anime, is the name of the biblical Eve in Greek and German, as well as many other languages, coming from the Hebrew name "Chavva" meaning "breath" or "life". There are frequent allusions to the biblical Adam and Eve throughout the series, as well as to the Evangelion's relationship with the Tree of Life.