Once Again I have arrived at the revelation that I am not doing anything with my life.
Also, I did some internet sleuthing and found some interesting things.
But I need to write some more.

also, the creepy cripple lady was looking in my window this morning. 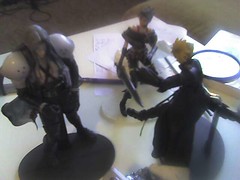 so... contrary to my earlier post, I have been semi-dilligently working on a new script. Actually I have several in my head, there's two I've been articulating. the first is About The Earthquake. It's like sleeping beauty, but it's set around 1900 AD. The second is a fairly autobiographical Emo Musical about emo problems. It's something I've been thinking about for over a year, but I never wanted to sit down and actually write it, because I'm afraid it might be boring and too mastubatory. but then I saw that waking life movie (or whatever it was called) and was like "if people can tolerate this, then they can deal with whatever I cook up." also seeing horrible movies like uh... that shitty underworld 2 movie or plays like Tales of the lost formicans I'm like "damn, I need to be doing something because this is garbage, and I've already seen it produced 2 times within 3 years."

so yeah... I'm excited about the EMO musical. Largely because I'm using existing songs that I really like as the songs instead of trying to write my own. There may come a point where I decide to make original songs, but this gives me a good foundation. It also helps that the songs already fit the story I had concieved.