Man, I've finally set up to render olD VHS tapes in my apartment. now that I'm not doing that full time at PACT I can do it at santa clara.
Man, bobby and I used to be extra stupid. i have video proof.
I found CMH tapes, so now I have all of them, and I found the entire viedo of wil howe at Paly with the exchange students, along with some of charlie brown rehersal. it's really neat. also the Elks lodge show on VHS. the whole thing! so... yeah! maybe I can overdub the good sound recording to the video and make a new one for youtube.
So I think I'm going to re-lease CMH as a pod cast. starting with the Audio only episodes. I can drag it out and do one episode a week. I wonder if anyone will care. then i will put it all up on Youtube. man... choji moji videos are special.
my nails are are dirty.
Nathan said he thinks I want what I can't have. I think that is true.

wow vlood in my mouth.

I found a burned CD Your mother cd that dosent show up on CDDB. it says "dont fuck with the ghost," but they don't have that as an album on their discography. is this a split? I don't even remember where this came from although it's high school era so probably adrian of JON YI!

Man, the choji moji concert at the elks lodge was a really nice point in my life. I need to work to get it back to at least that point. 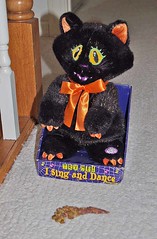 All the cats in my house puke., originally uploaded by zerobatsu. 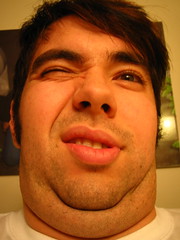 My exercise is working., originally uploaded by zerobatsu.