I want more time in the day. and more time to be artistic. and to not be constantly tired. will my contract be renewed? I don't know. I almost wish it wasn't because now i feel like I have the confidence to actually do thoes things that I should have been doing last year but was too depressed. Too bad Apple can't just hire me for 20 hours a week. do I really need $2000 a month? Where does my money even go anyways? Oh yeah, I spent like over $800 on my room last weekend. and I bought a mandolin. and I'm sure I bought some other expensive stuff at some point reecently. and Now I'm looking at another $2000 in Network attached stoarage. I also want a upgraded livejouranl account. I need to join a gym, or like a tae kwan do place. that's actually something I really think I would like. I like that they have tournaments. There is a kung fu place on the way to work, I think I will look at coming back. I also need to buy groceries.
man... my life is just sooooooooo hard! I should really be making $10/hour more. at least. poops.

I need to set aside some time to like, find some art that I like, and try to imitate it. not because I want to steal it, but because that way I can reverse engineer it. I wish I had time to do that at work. hrm... Maybe I should. in other news, I need a new camera. hahaha. man. I need to grow up and spend my money better, that's really what I need. I think I will head over to palo alto tonight, I need to buy some stuff. actually, I should just do it this weekend. like swunday. I need a VESA adaptor and I need a banjo book so I can actaully learn where the notes are on the fretboard.
I have been playing mandolin non-stop or at least as much as I feel like I possibly can. I think part of what helps me is that the book my mom and I got is really good. like... yeah. I feel like having a direction and a teaching style that works with out I want to dissect the insturment really works. I guess I like being able to mentally break stuff down into their component parts. like after fixing a bunch of computers I came home and couldn't see my computer as a thing, but as this collection of pieces. it's fun!

Hrm... my thumb and elbow and shoulder have been hurting lately. I think it's because of the mando and my job. ah RSI. hrm...

So yeah... I really like my gorillaz figures I got. I thought they were cool at the time, but now I really like that I bought them. I should get the other two. I don't know where Murdoc's bass went. 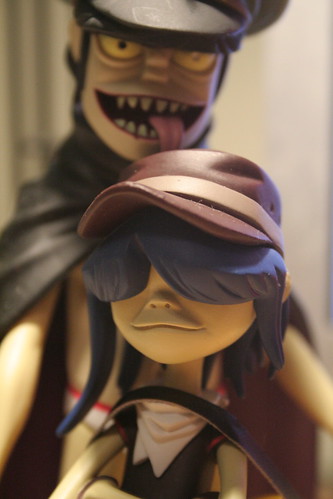 this is also cool:
http://www.gelaskins.com/4/4_2_0.php?CategoryID=6&ProductCode=196
this is what inspired the art copying comment above. I keep thinking I should get a wacom pad and learn to draw, but I know I have all this other shit I've bought that I haven't used yet. I need to put up these track lights I bought. I dont know. I haven't asked the landlord. I dont know how much he likes us. Carol's House sounds awesome. I wish Nick could pick up after himself sometimes. I hate feeling like his mother but he leaves his shit all over and that includes rotting food. I feel it's comporable to pissing all over the toilet and never cleaning it up. i mean, it dosen't bother me, so why should I care right? and if I do need to sit on the toilet in the near future, I'll just wipe it up right before I sit down.

I'm excited about re-doing the living room. I want to get a 40 inch tv. I think it makes sense to get somehting good now, because I'm gonna be stuck with it for a while. I wish I had more money to throw around on stuff like that (not that I don't already single handedly invest a majority of my money into the electronics in the living room. hrm... thousands of dollars) I think mike is thinking about getting HD cable. I think that would be fun. and getting a new tv makes sense if we're gonna do that, because this one (in addition to being small) also only has one HDMI intup.

I keep thinking about getting renters insurance because if we get broken in to, or if someone just comes in because the door is unlocked and no one is home (like carol did last weekend) then I am the one who gets screwed. but I also get pissed off at the idea of personally buying and maintaining the stuff that eveyone uses but also paying $30+ a month so that if one of thoes same people fucking dosent wake up when the cat burgelers come I am not 100% fucked. I think we should have better communication in this apartment. I wonder why I've never written about this in LJ before. I feel like I haven't been documenting my amazing life much reecently, and I know that looking back on old entries is super fun and interesting. hrm, I was going to ride my bike, but now I don't think I will because I am taking too long with this. But I like that I am finally able to do some LJing, so that's good.

Oh yeah, so with my LCD arm I can turn my monitor 90º and then have all thoes really long Lyrics and tabs and stuff show all the way. or just... I dont know Have somehting different. I think It will be nice. I still need to buy thoes computer skins from that macskinz site. man, I don't want to go to work today. can you tell? I'm still here and it's 8:08. I should drop off my netflix. I wish there was a postal box somewhere closeish. well, there is but yeah.. blah. I seem to regret every decision I make and then I am unhappy. I dont know what's wrong with me sometimes.
I should add hrm to my spelling dictonary. yar. blah.
did I mention oh i did. 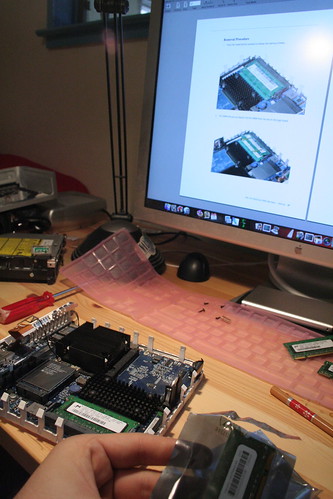