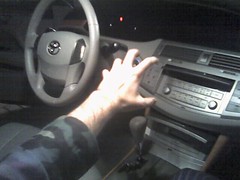 I hate myself, originally uploaded by zerobatsu.

I was thinking that my anual bout of crippling suicidal depression is comming late this year, but I guess it's the same as 2004 (mid-late feb).

I'm really tired of this stupid game. Where I'm just dead and ineffectual 4 months of the year. I HATE

I just rationalized it like menstruation, something that I just have to deal with every winter. But it's getting so lame. And I get tired of seeing scissors and yhaving my first thought be "I can stab this into my head!" or driving to work and thinking "wow, could just make a sudden jerk and I would drive off an overpass and die." I hate having all my thoughts turn into guilt about my own short comings, and that guilt turn into frustration with no outlet but the pain in my chest. I hate knowing that nothing's going to change unless I make it change, and hating that I continue to do nothing, instead letting the redixulious aspects of menial, day to day life become a higher priority. Just as garbage like the internet is a higher priority than pursuing my dreams. Of course I have absolutley zero dreams, so that's not an issue.

I thought that maybe if I went home and cried I would feel better. But I couldn't cry now that I wanted to. The las time I cried was Oct 3 2000, I had a dream about my cat pixel and I woke up and cried because I missed her. I hate people. I think cats (and probably dogs) are so much more genuine and deserving of my respect. This is the exact train of thought that prompted me to write the children's book in 2004. Wow, even my depression is in a rut. Hahaha I'm laughing because I am so horribly pathetic. Hahaha. Let's all laugh at me.

I want to get a tattoo that says "I've given up on my self" to remind me of my rediculiousness.